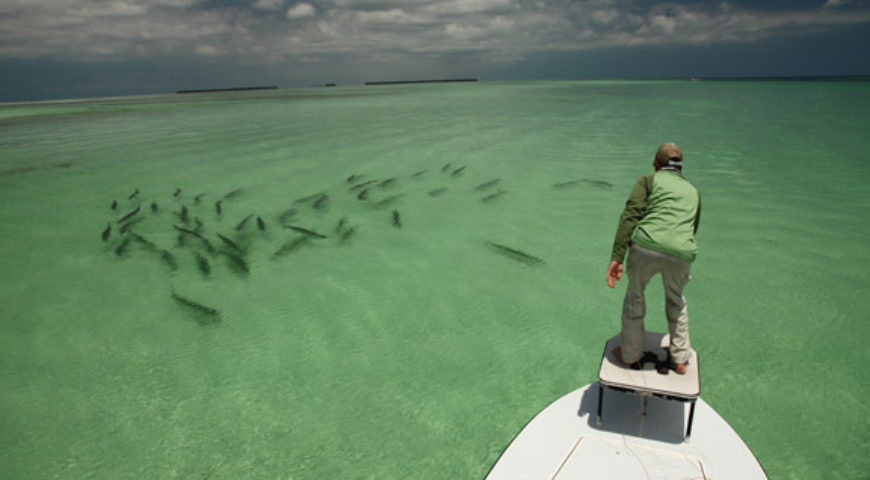 I think the real reason people fly fish on the flats is because it’s challenging.  We don’t just one day decide that we are going to start to saltwater fly fish because it looks easy and fun, but rather, because it’s hard and exotic.   We find our way to it through airports, long car rides, and some sort of sacrifice in search of something exciting, challenging and beautiful.  Sometimes the road will lead there from a freshwater tout or bass background and sometimes it will evolve from a bait and spin-fishing past.  The common ground is that it represents the next level in our angling evolution.  At some point in this journey of fishing you will have to face down the silver king…

He’s standing on the front of the boat for the first time nervously going through the finer points of the article he read about Florida Keys tarpon fishing.  All of the details about angles, the retrieve, the hook set, and low steady pressure are whirling through his head.  It looks just like the films, but is much hotter.  Now he understands why the guy at the fly shop recommended the brand-new hat he just bought for the all important sun protection factor.  Having already accomplished the challenge of post-911 air travel, convincing his wife that this was a good idea, and at last finding the right guide, he’s sure that the difficult part still lies ahead.  This point was made clear on the way out when after talking about what kind of fishing he’d done before, the young guide smirked and pointed out that all the other fishing didn’t compare and that Tarpon were going to change his life.
“Tarpon rolling, two o’clock.  Did you see him?” The guide asks.
“No, where?”
“Two o’clock… right.”
Five days in the prime of season are now coming into focus.  Having never seen a tarpon roll before, he recalls the visual diagram of a skiff with clock coordinates, and looks over at two o’clock.
“No, the other right, wrong side… two o’clock… point your rod.”
Nervous and already sweating, he lifts the rod and swings right towards sunrise.
“Yeah, right there, two fish just rolled. ” The guide pauses… “You ever seen a tarpon roll?”
He’s herd of the reputation of the Keys tarpon guides as being brutal, intolerant, and competitive; even to the point of punching one-another at the gas station, or even out on the flats.  They are known to break down first-timers who can’t get the job done. But, he had looked online for just the right guide, and asked his buddies on the message board about this guy.  Still, being a rookie was nerve racking as hell and he had never seen a tarpon.
“No, I haven’t”
Silence.
More Silence.
Long Silence. 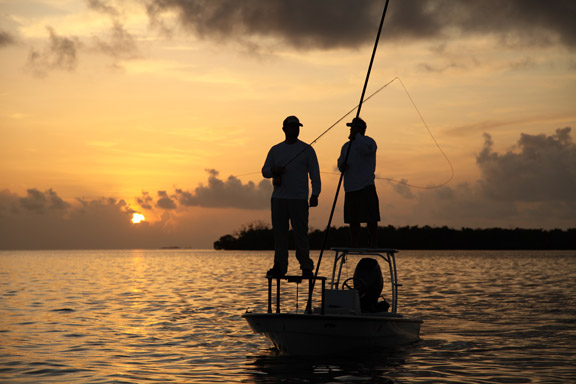