Permit fishing in Key West is one of the most intense and rewarding angling experiences.  To catch a permit on fly is the culmination of angling skill, dedication, and pure hunting… The silence is deafening!   The water’s surface is viscous and shinning silver and orange.  The outgoing tide is tepid, with the current passing between your legs being the only indication you’re wading, because it’s the same temperature as your shaking, nervous body… “Remember to breathe!”

Vision drifting in and out, eyes straining for focus.  Legs are wavering, shrinking into the soft mud and grass.  Your heart beat is growing, De-Doosh…DE-Doosh… The fly line is pulling against your hand; being dragged backward by the current falling off the flat.  Sweat drips from the cork grip of the rod.   “Get ready for the shot!  Concentrate.  Look.  Focus…”

An angular spike rises from the surface, flaring, pink, purple and black….then another…then another…

The silence is broken by the woooosh of the fly rod.  The line rips from the water’s oily grip and the weighted crab fly lands with a “plooop” to the side of the school.  The spikes straighten and turn!

Hands are fumbling, slippery and shaking.  There’s no breathing, only deafening thumps of your heart beating  De-Doosh…DE-Doosh…DE-DOOSH…

The surging tail lifts and stabs into the air!  The line tightens, 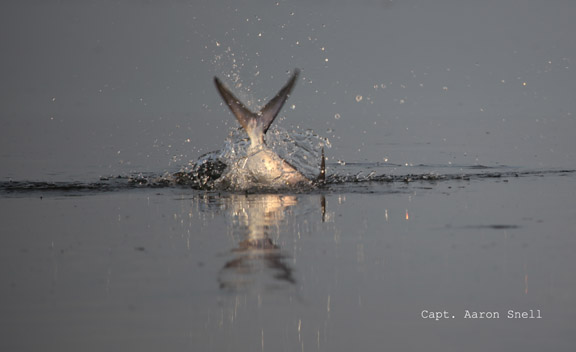 Despite what some current presidential candidates believe, man evolved from the apes roughly 2 million years ago during the Pleistocene epoch.  The major geological event of the day was the formation of the Isthmus of Panama, which rose from the ocean to create the land bridge between North and South America.  This caused a major climatic shift.  The Gulf Stream began to flow, Europe warmed, the polar ice cap formed, and the lush rain forest of northern Africa began to dry and become a grassland savannah.  In order to be more efficient hunters, and adapt to the changes in their ecosystem, Homo Sapiens stood up and became Homo Erectus.  This evolutionary change cemented sight as our primary hunting sense.  We stood up in order to see over the grass.

What makes Permit fishing so hard is that I have to see them first. To be fair, I should call it Permit hunting because really what I am trying to do before anything else is spot the jittery, mirrored bastards.  Fly fishing for these oddly adapted fish requires me to tap into my primal instincts.  Success in the world of permit fishing comes from studying the game, and honing the unique skills used to hunt them.  Focus, timing and stealth are all important aspects of the hunt.  Nowhere is this more evident then when I choose to hunt the permit one-on-one in his environment.  In my opinion, wading for tailing permit is the pinnacle of the sport.  When I step out of the boat, and hunt tailers on foot, success or failure is determined entirely by my skills as a hunter.  The absence of a boat and guide bring a purity to the challenge, it requires me to embrace my primal core, and fool my prey with bunch of fur and feathers.

A strong case could be made that two million years of evolution has led to me stand looking out over the seagrass covered flat on a falling tide, but I must give credit to my quarry, if we as humans were required to catch permit wading the flats with a fly rod in order to survive, pretty sure we would have gone extinct long ago. –Will Benson  (extended version of the Drake Magazine article Worth The Wade, August 2011, Photo courtesy of Capt. Aaron Snell)

If you want to feel the rush of the most addictive drug in all of Saltwater Fly Fishing, come to Key West in the summer and experience this hunt. Or watch this:  Satori Trailer